4age PCV how does it work

4age PCV how does it work

Was looking at the intake manifold today and got curious. I always thought that outlet for the pcv on the intake manifold is simply open on the other end, i.e. the crankcase vapors go to the manifold, but they don't, rather they seem to end up somewhere in the throttle body?
Why is that? And why doesn't the 4age have an actual PCV valve? How does the system work in the case of the 4age?
Check out my YouTube channel: https://www.youtube.com/channel/UCwosUn ... xtqkNJ3Fbg
Check out my blog: http://www.driving4answers.com/
Heaps of 4A-GE and MR2 mk1 aw11 content on both.
Top 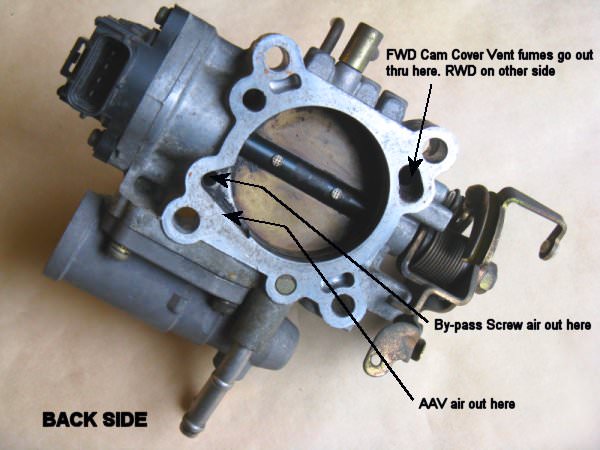 Then they added a matching port in the throttle body itself that went around
the butterfly and exited out a hole in front of the butterfly. The location of the
port is shown in the above pic. The fumes exit at atmospheric pressure so
there is no vacuum drawn on the crankcase. If the cam cover vent connected
directly into the manifold as its location suggests, the crankcase would be
subject to manifold vacuum, and while this would be great for stopping oil leaks,
it would suck crap in thru the seals and is generally considered a bad thing

There is actually a pinhole vent from the cast in tube to the inside of the
manifold that is designed to draw fumes into the manifold while the engine
is idling with closed throttle. I guess that was a precursor of the PCV valve.

I wouldn't plug the pipe, you want the crankcase to vent the blow-by. Putting a filter on the nipple would drip the condensed oil onto the manifold and make a mess. Best bet would be a catch can, or even a 'road draft tube' to direct the oil vapors away from the engine. You would want a filter on any open crankcase vent either way you go. Easiest way really is to keep the stock vent set-up.
One shot, one kill.
Top

I would guess that cam cover venting probably falls under the heading of "emissions"
so not having the fumes go back thru the engine to be burned, might be a problem in
a state that has emissions testing ?

And either running an open vent or a catchcan, from time to time you get that nice
hot oil scent coming thru the cabin ventilation system

Venting back into the intake
solves that issue, so good advice ^^^^ up there !!

Thanks guys it's clear now.

What they were essentially trying to do is to separate the vapors from the oil itself. That damn complicated baffle inside the cam cover finally makes sense. It's there to help prevent oil getting picked up. They didn't plug the pcv hose into the manifold itself because that would suck too much crap in as you say Jondee86. So they put it right in front of the throttle body where the sucking force is weaker, but still strong to pull air and hopefully not as much oil. As you said, the whole system is like a primitive pcv valve. When the throttle is closed the sucking force is the lowest so it doesn't suck crap in during idle, just like the pcv valve which is closed during idle. When the throttle opens, more sucking force exists and pulls the crap in.

It's just that the pcv valve is operated by manifold vacuum, which is not the sucking force, but the difference between the pressure inside the manifold and the atmosphere. But essentially it is the sucking of air of the pistons that close a standard pcv valve, and it's the decreasing of manifold vacuum, i.e. the manfiold pressure becoming very similar to the atmosphere pressure, because the throttle opens fully, that open the pcv valve and let the crap flow through it because I guess it's easier for the engine to burn it all again during acceleration and it won't mess up the air/fuel mixture that much?

So for my bike carbed 4age setup I am thinking about having a hose from the cam cover breather go to a catch can and than from the catch can to a sort of a divider with 4 outlets which are then connected to each of the intake runners. Make sense?

I've seen two types of catch cans out there. Ones with just 2 ports, and other ones with 2 ports and a tiny air filter breather thingy attached to a third port. I guess I will be perfectly fine with one that has just 2 ports? I don't get what the third port is supposed to do?
Check out my YouTube channel: https://www.youtube.com/channel/UCwosUn ... xtqkNJ3Fbg
Check out my blog: http://www.driving4answers.com/
Heaps of 4A-GE and MR2 mk1 aw11 content on both.
Top

mr2mk1hero wrote:Also, why does the cam cover where the pcv outlet is have that complicated baffle
system? To try and prevent actual oil from being picked up right?


Correct. At 8000rpm engine speed the camshafts are doing 4000rpm and oil is flung
off the cams in all directions. Without the baffle a significant amount of liquid oil
would exit via the cam cover vent.

These days it is becoming more common to talk in terms of kPa(absolute) when
considering manifold pressure. Thus all pressures are stated relative to zero kPa
which is a perfect vacuum. The old method of measuring manifold pressure by
counting backwards from atmospheric pressure can be very confusing

So, using my car as an example, the engine idles at 30 kPa, cruises at 65 -75 kPa
and will reach very close to 200 kPa at redline (boosted). At the other end of the
scale, the pressure will go as low as 20 kPa on the overrun with a closed throttle.

Alright, definitely makes more sense. Took me forever to figure out the system counting down from atmospheric pressure.

So, any thoughts on my pcv system for the bike carb conversion?

"So for my bike carbed 4age setup I am thinking about having a hose from the cam cover breather go to a catch can and than from the catch can to a sort of a divider with 4 outlets which are then connected to each of the intake runners. Make sense? "
Check out my YouTube channel: https://www.youtube.com/channel/UCwosUn ... xtqkNJ3Fbg
Check out my blog: http://www.driving4answers.com/
Heaps of 4A-GE and MR2 mk1 aw11 content on both.
Top

This ^^^^ or if you have emissions testing, you can use a closed catchcan and run
a hose from the catchcan to a hosetail in your filter mounting plate. That way you
are mimicing the factory system of venting in front of the throttle plate.

Connecting to the intake runners will not work as the runners see the same level
of vacuum as the intake manifold on the factory system.

PS: If you use a hosetail, make sure the nut is loctite'd or otherwise secured, as
you don't want it to come loose and go into the engine. A rubber grommet that is
a tight fit and then just push the end of the hose thru might be a better option

So basically it won't work because there is too much vacuum in the intake manifold?

What if I add an actual pcv valve somewhere before the intake manfiold?
Check out my YouTube channel: https://www.youtube.com/channel/UCwosUn ... xtqkNJ3Fbg
Check out my blog: http://www.driving4answers.com/
Heaps of 4A-GE and MR2 mk1 aw11 content on both.
Top

As I understand it, the PCV system creates a flow of air thru the engine. There
is an inlet (usually from after the air filter) that allows filtered air to enter the valve
cover, and an outlet controlled by the PCV valve. Thus the interior of the engine is
"flushed" of blowby fumes by a more or less continuous flow of air.

As you outlined above, at idle when the manifold pressure is low and production of
fumes is also low, the PCV valve restricts total flow. When manifold pressure is high
and fume production is high, the valve opens to allow a much higher extraction rate.
Because it is impossible for a simple valve to exactly follow the rate of blowby fume
production, the amount of clean air drawn into the engine will also vary. In extreme
cases, if the PCV valve cannot keep up with fume production (worn engine) some
fume may be forced back up the fresh air intake and into the intake manifold.

So while you could create a PCV system for your engine, simply using a catchcan
and routing the discharge from the catchcan thru the filter backplate, would be a
simpler system to implement. The end result is effectively the same, and there is
less chance of creating tuning problems.

As some wise man once said... "just because something can be done, doesn't mean
that it should be done"

Users browsing this forum: No registered users and 4 guests