My most recent mod is more for the daily driver side of my Corolla and less to do with performance.

I purchased Audi's LATCH retro kit part # ZAW269005 to add a child seat LATCH system ("Lower Anchors and Tethers for Children") to the Corolla. We mounted mine in the center of the rear seat since I don't plan on taking two kids in the Corolla at on time. The center position is also the safest for a child in a side impact accident. Plus the center seat position gives my kids a direct view out the front window which should limit the amount of car sickness induced by the Corolla's suspension.

Audi Latch bar. There are two different part numbers. The one with the wider mounting brackets is the one I used.


Underneath the floorpan both holes clear everything. One of the holes comes out behind the heat shield which is no big deal. My buddy Dan helped me with the install and used some three inch washers to help distribute the force in the event of an accident.

I mounted the top latch tether mount off to the side since the seats split 50/50 and the tether wants to slip between the seats. I may change this in the future but it works fine for now.

This setup works so much better then the seat belts. I could not get the seat belt to tighten down enough to hold the car seat securely. Plus the LATCH system makes it a lot easier for me to swap car seats from car to car if need be. The end result came out very nice.

There are actually hard points in the Corollas for mounitng child safety seats. Not as fancy as what you've got, but if you pull up the carpet behind the rear seatbacks, you'll find a threaded hole with no apparent purpose, about 6" in from each side and about 6" behind the seats, very roughly. There's a pair of them, and they are reinforced mounting points for restraints, shown in the old driver's manual IIRC. Toyota sold a restraint kit that bolted into them. (Which probably doesn't match any modern child seats.)

FWIW there are also two hard points hidden in the "C" pillars. If you take the trim off, they are under it. Designed to mount rear shoulder belts. Same deal, a threaded insert welded in, so you can just bolt in an attachment.
-- Original owner, 1985 GT-S
Top

Great upgrade! Yea that rear seat center section does position the car seat higher. I do have one grand kid who likes riding the corolla (i need to get it runnin again, cause he's always asks me to go ridin)

It makes installing and removing a car seat a lot faster. Plus I can get a really snug fit with the LATCH system where as the seatbelt would leave the car seat a little loose. I'm really happy with it. Now all I need are ear plugs and Dramamine so the kids will enjoy the ride.

Thinking Outside of the Box: The IACV You Need In Your Life!

I fitted a universal 3 point set in the back of mine, kids are big enough to not need the latchs. 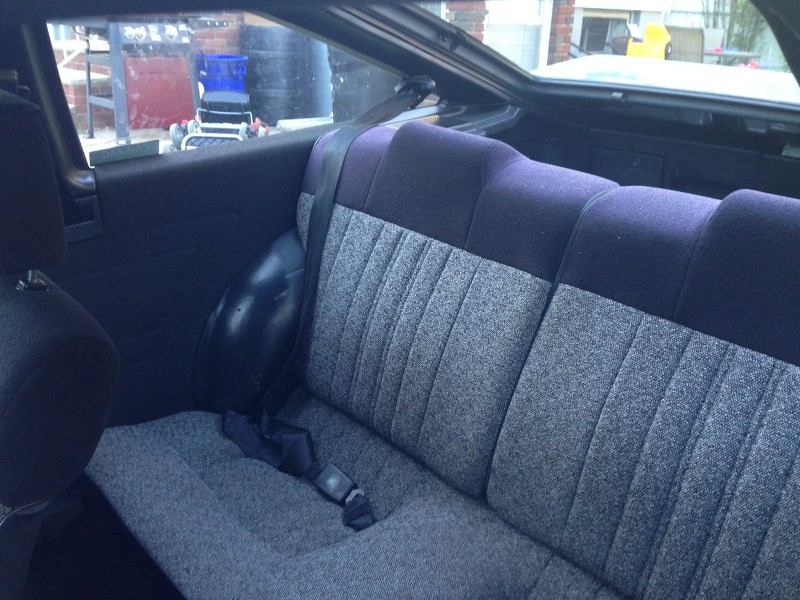 Is there an existing bolt hole in the C-pillar or did you have to make your own?

Existing. The euro 86s had 3 point belts. After years of searching i gave up. I used a seat belt bolt cut shorter to fit.
Thanks, im probably one of the few who went w sr5 interior in a gts, lol
haha cali...i got one of your 86's and you're not getting it back.
My turd of an 86
20v swapped 86 write-up
Top

Return to “DIY, do it yourself projects and tricks”

Users browsing this forum: No registered users and 1 guest