Anything about cars, as long as it's clean...
No offensive language, no profanity, no nudity, nothing that your mom will slap you for...
Be nice to others.
Post Reply
6 posts • Page 1 of 1

Prepare to get nerdy. A friend of mine recently got some TE37 RT's for his S2000 fresh from the factory and agreed to let me take a look.

So this is going to be a little different than a normal review because I used the industrial measuring machinery I use at work every day. The machine used is a Mitutoyo CMM, it rides on air bearings so it feels like an air hockey table, it also costs as much as a new car and uses an incredibly flat piece of granite as it's table surface. It uses a probe tipped with a small ruby and records its movement in the 3D environment of X, Y, and Z axes. Whenever the tip gets moved by bumping into an object it records the direction and distance of travel. It can reliably record down to the .0001" and reasonably measure down to .00001", as reference, the average human hair is .003" and the thin plastic that seals up cigarette packets is .001".

I should also say that I can only get so accurate of a reading with the wheel having been painted, at these tolerances slightly thicker paint and clear coat in one area can dramatically affect the readings. Also, these aren't my wheels, so don't break in here expecting to find them. 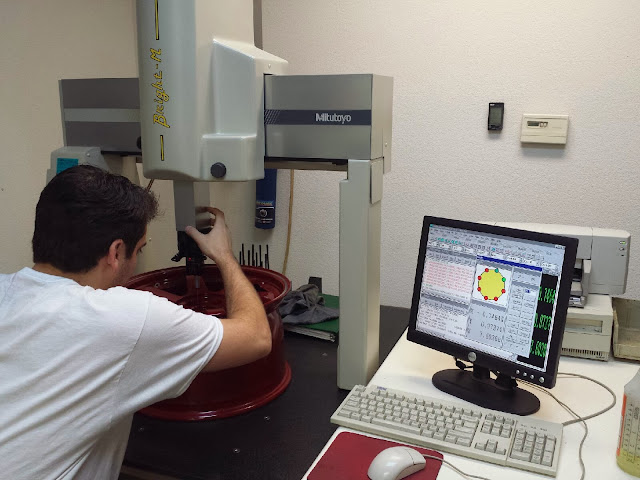 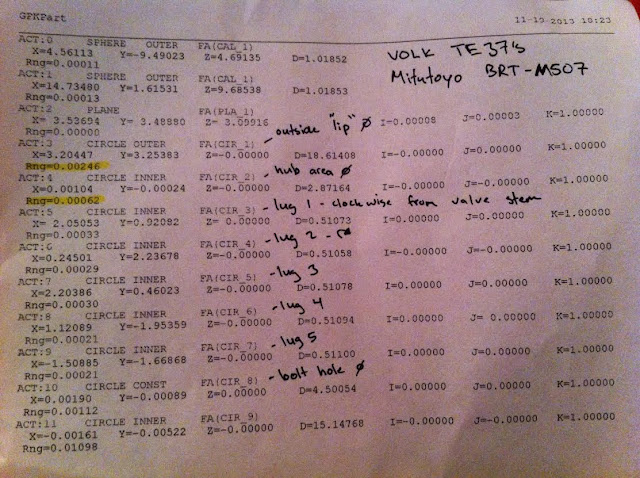 CIR-1 is the lip near where the bead sits, I couldn't measure where the bead of the tire sits because on these wheels it's knurled to prevent slippage. The variation from the smallest to largest part of the diameter is only .00246", so less than a human hair, and if you consider that's from high to low, the average variation is probably much less than half that. At this point I set this circle as the X and Y zero, so in addition to everything I check past this point, we'll also see how close these features are centered to the "middle" of the wheel.

CIR-2 is the diameter where a hubcentric ring would contact the wheel, the variation I measured in this diameter, again from high to low, is was only .00062", so a fifth of a human hair total, again, less than that on average. In addition, in X it was off by .001" and .0002" in Y, if you spin this wheel with it only being supported on the hub area, there would be about a third of a human hair of variation total. Amazing considering the variation paint thickness provides.

CIR-3-7 are the intersection of the holes the wheel studs go through and the chamfered seating area a lug nut presses against. The variation in diameter on these doesn't matter much, but still only ranges from .51073" to .51100"

So whats this all mean? The wheel is round. In all seriousness though, considering that these wheels are mass produced by machines, aren't cut from billet, and have a layer of paint on them, all introducing variables, I'm amazed with the findings. The range of variation found is less than I've seen on parts my company has made for rocket engines, machine guns, and medical equipment, I wouldn't expect less from a company approved to make wheels for Formula 1. Unfortunately I haven't taken the time to do this with a brand new Rota, XXR, or the like, but if I can find some one with a brand new wheel, I will.

If you have any questions or comments, I'd love to hear them, this is my first time doing a write up like this.
Top

High tech tomfoolery. Very interesting.
So not only do they look cool, they are a true TRUE quality piece =)
irony.cc
Top

I cannot comprehend how much engineering that goes into making wheel art!

Users browsing this forum: No registered users and 8 guests