Keeping it simple and stupid.

Keeping it simple and stupid.

So ... while taking my Levin to the track is fun and all, I realized I would never feel comfortable enough to push the car/myself to the limit. Its basically a 2nd 401k at this point. Then again, its too fun to not take it to the track so I found a solution ...

There's only one goal for this "2nd" corolla; SEAT TIME. Keep everything as simple as possible (and safe) so I can get as much seat time as possible. I initially was trying to find a shell or something and build it from scratch, but then I came across this one on facebook. It was too good of a deal to pass up. Its not perfect by any means, but all the good stuff is there. Healthy running 20v, welded roll cage, tube front, all the adjustable suspension bits, etc. 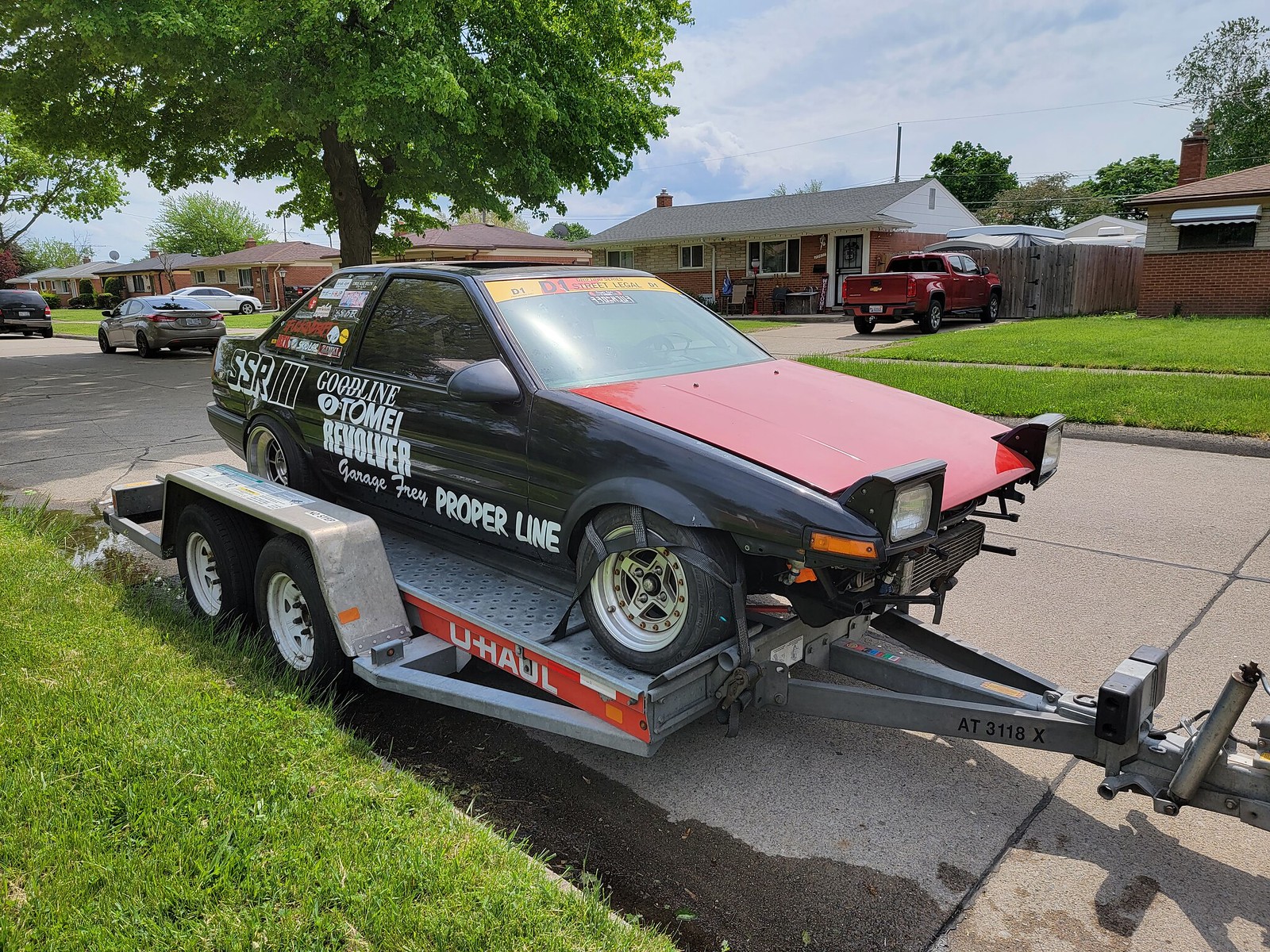 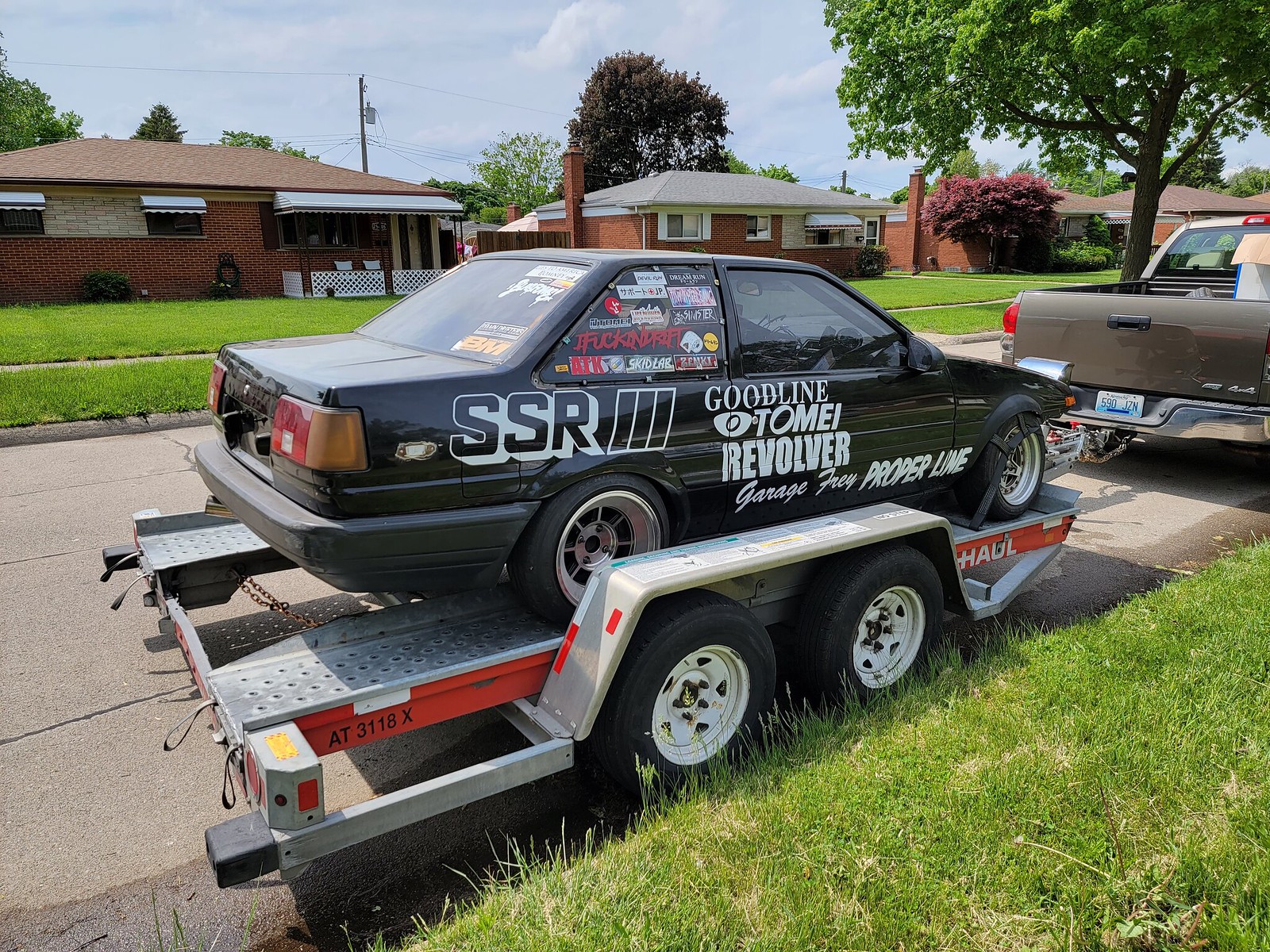 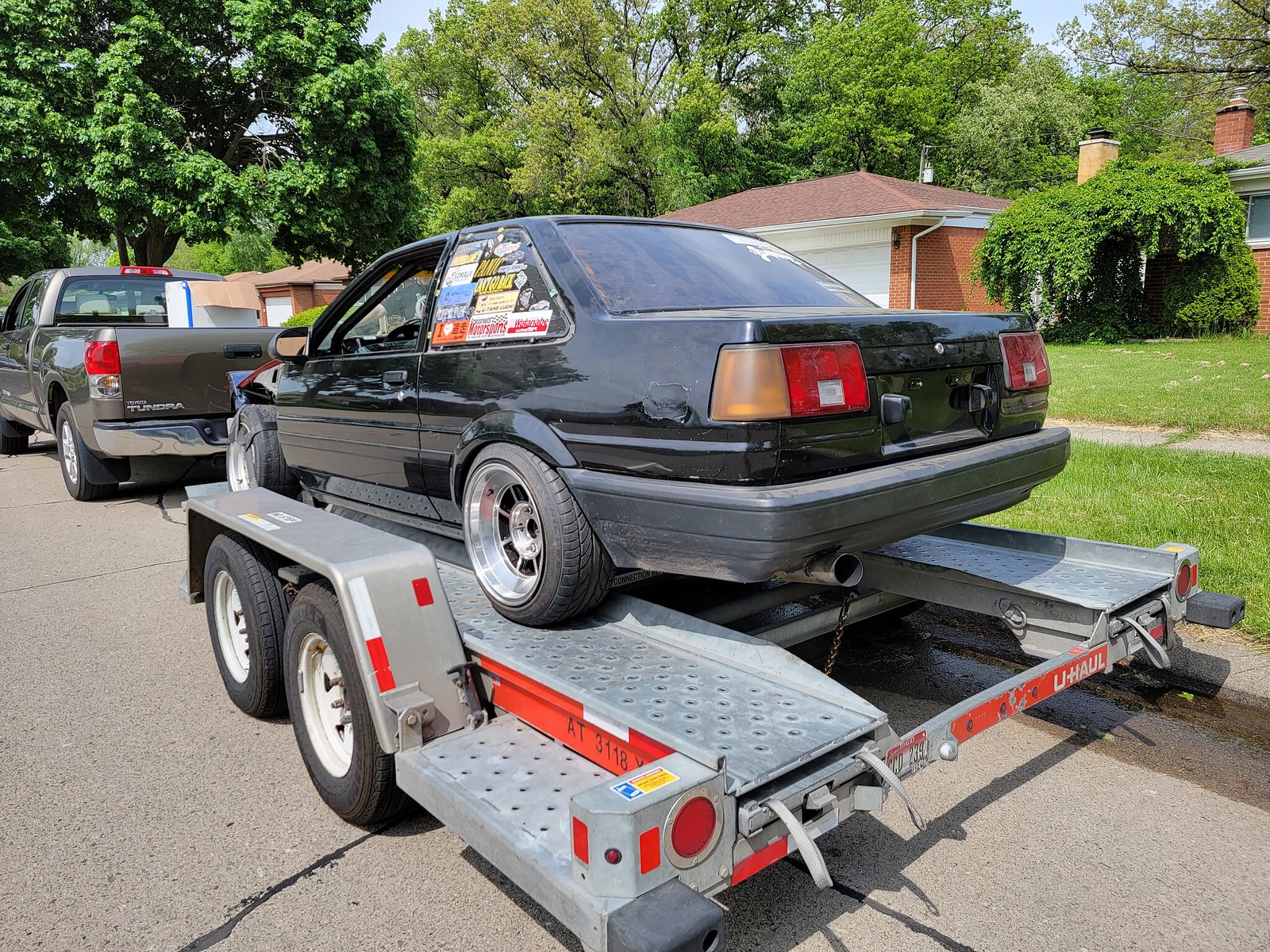 The wiring was an absolute nightmare, so I decided to rip everything out and start from scratch. One thing to note, I've never wired a car like this so it was all a huge learning curve. 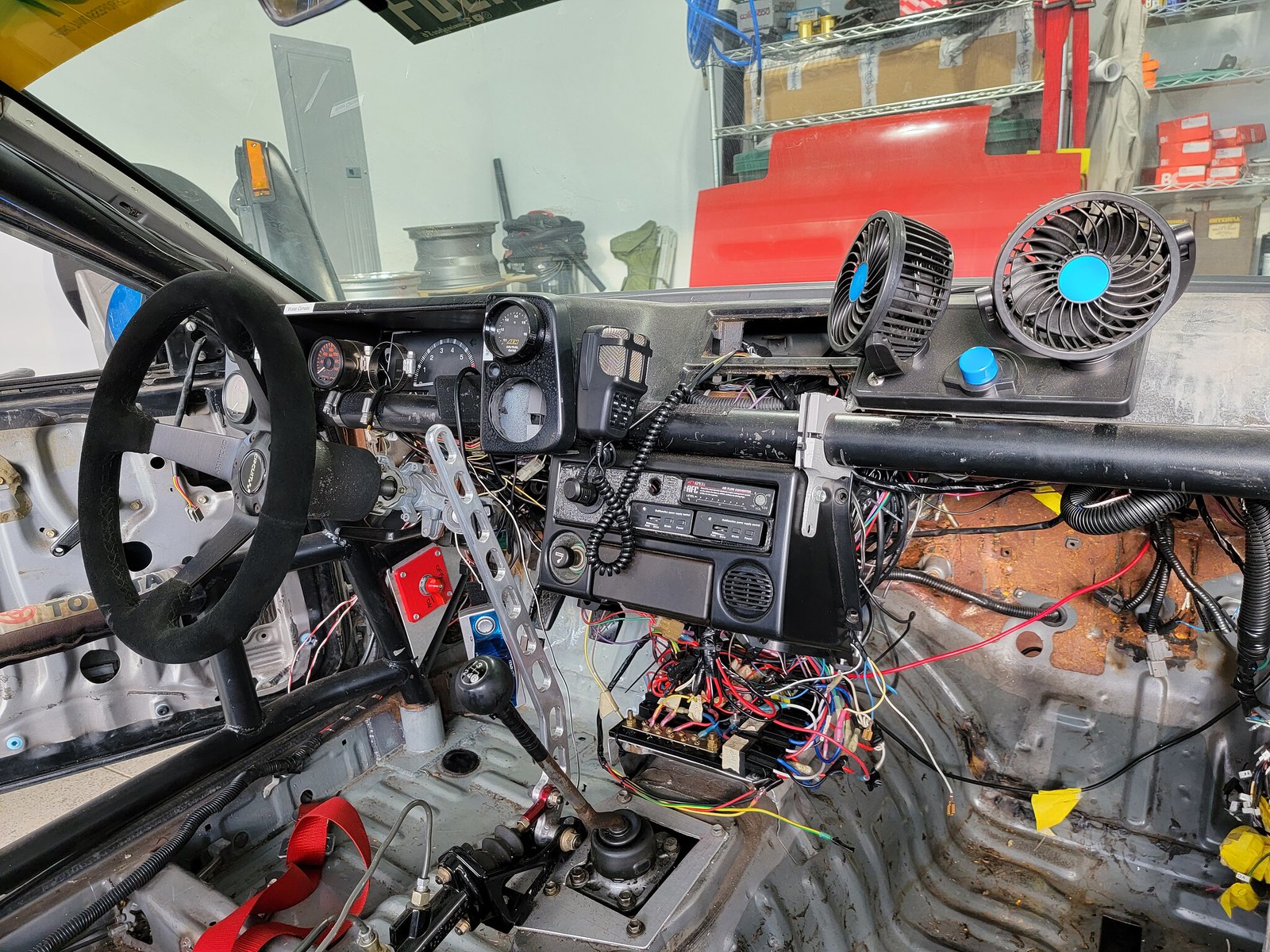 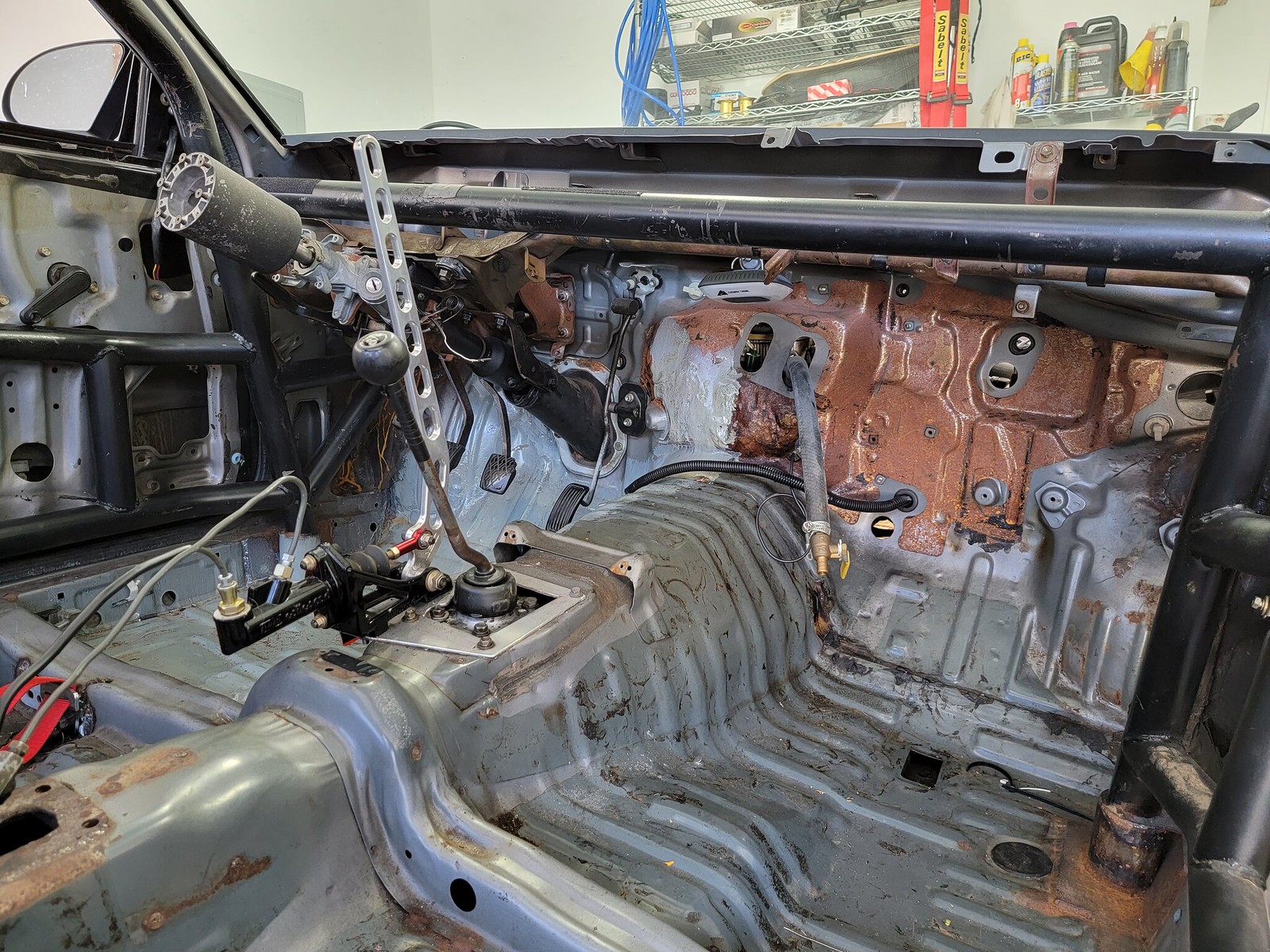 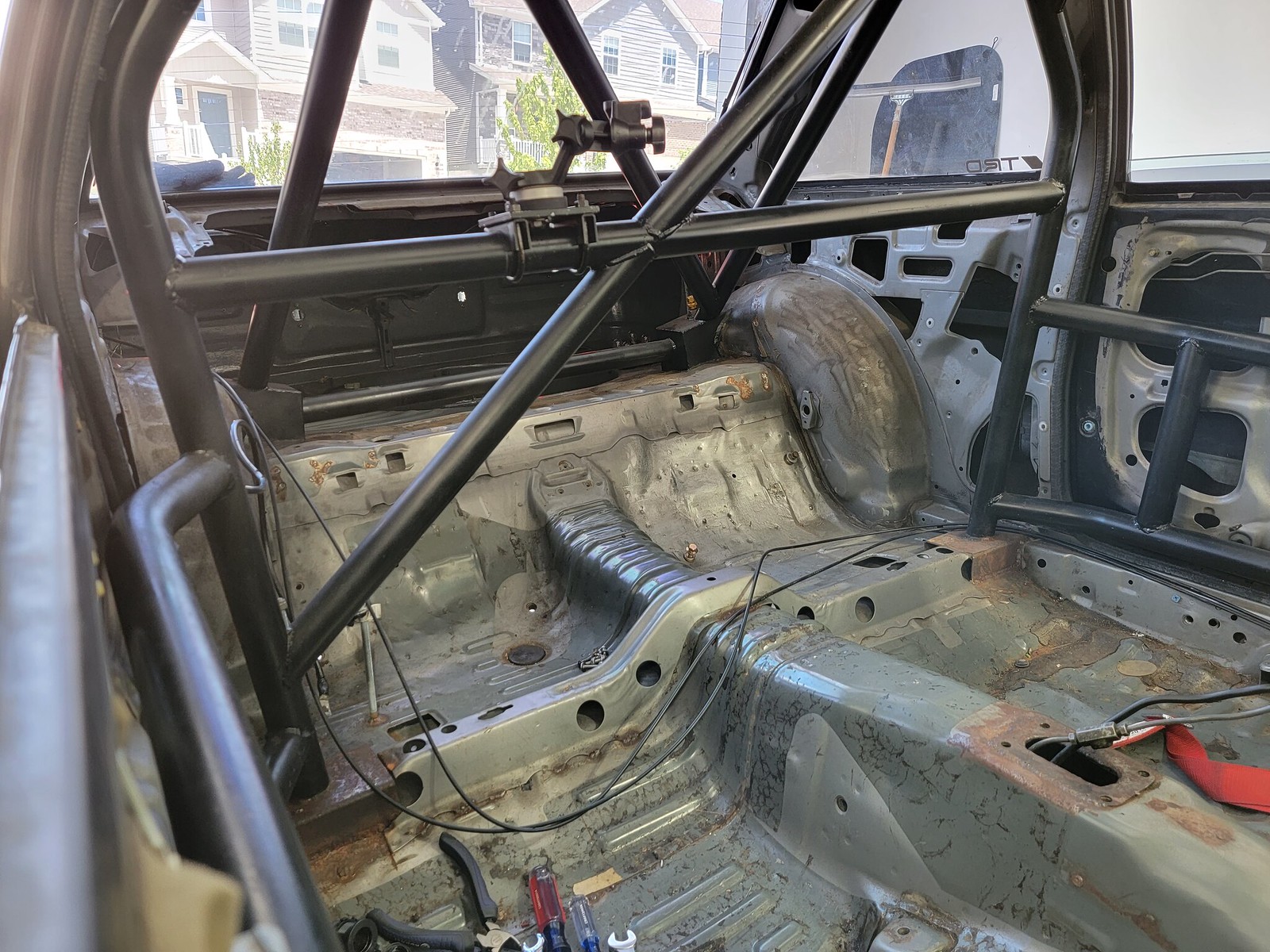 The engine harness was just as bad as well. The car came running with a microsquirt but I upgraded to a Haltech 550 which I had purchased for my other car but never installed it. I also bought the BattleGarage universal 20v 4age harness. I initially bought their standard one, but I didn't realize it was designed for oem style setups and using the firewall connector. Luckily Grant was nice enough to let me exchange it.

Getting the car to run on the basemap was an experience as well. Aside from me winging it, having never messed with any sort of aftermarket ecu before, the car idled like total ass. Which was bizarre because it idled fine when I first bought it. I ended up sending it off to this guy Bradley Hackworth of SwapShopGarage here in KY (I was planning on having him tune the haltech to begin with) and turns out whoever setup the microsquirt before me took 2 teeth off the crank signal gear in the distributor. But took the teeth out opposite from eachother. Therefore the ecu was seeing TDC every 180 degrees and losing sync. Once that was figured out, they changed the trigger count to 12 and it ran like a champ! It ended up putting down 135hp at about 7600rpms. 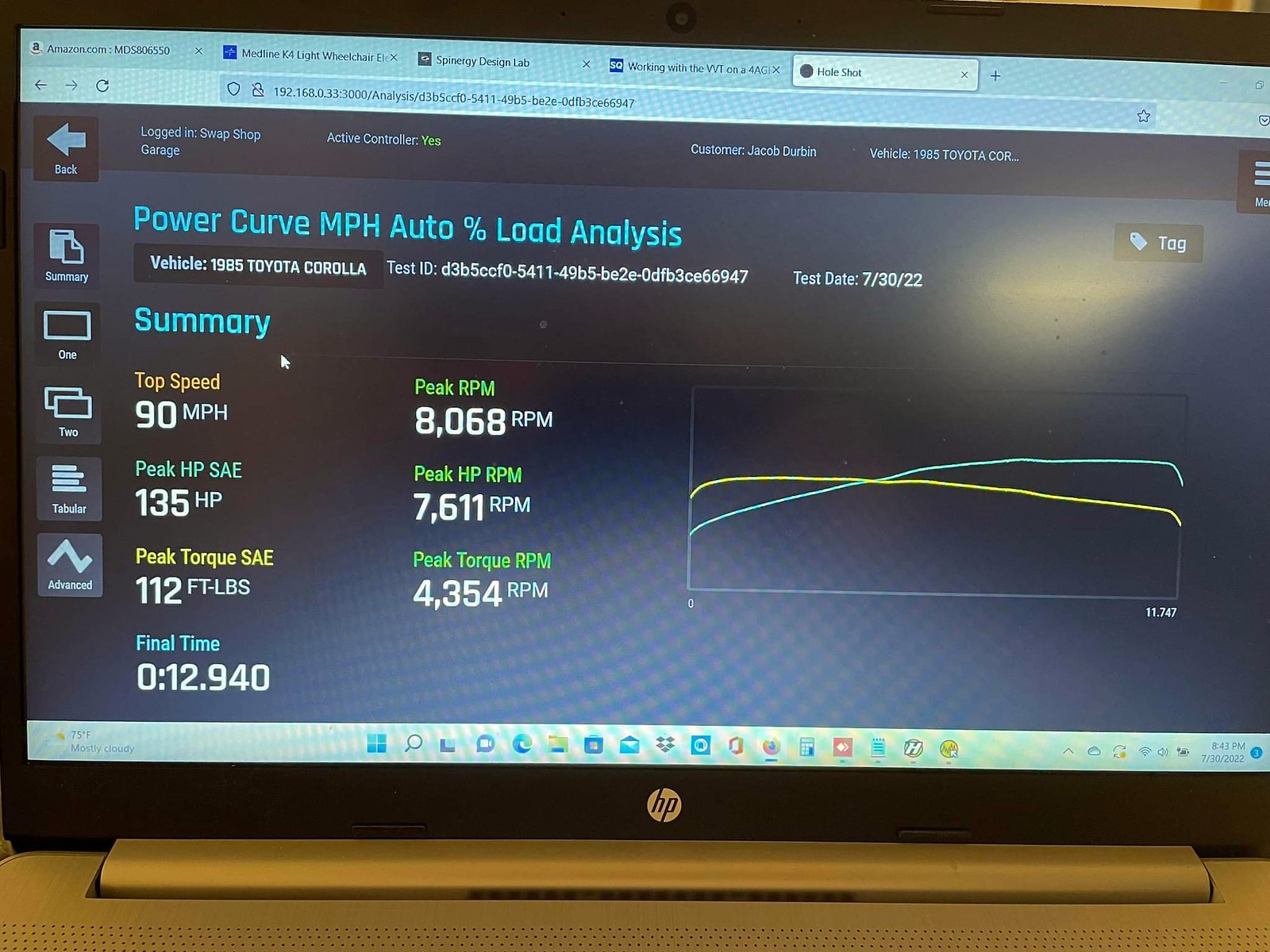 Here is a video of it on the dyno:
https://youtu.be/Zel138ldKSE

And lastly here is the car in its current state!
I sold the pair or 15x9 rota wheels and put on my pair of 14x7 work equip meshes, traded some GTS fuel lines for replacement front fenders (only installed one), and slapped on a cheap duraflex goodline rep bumper. 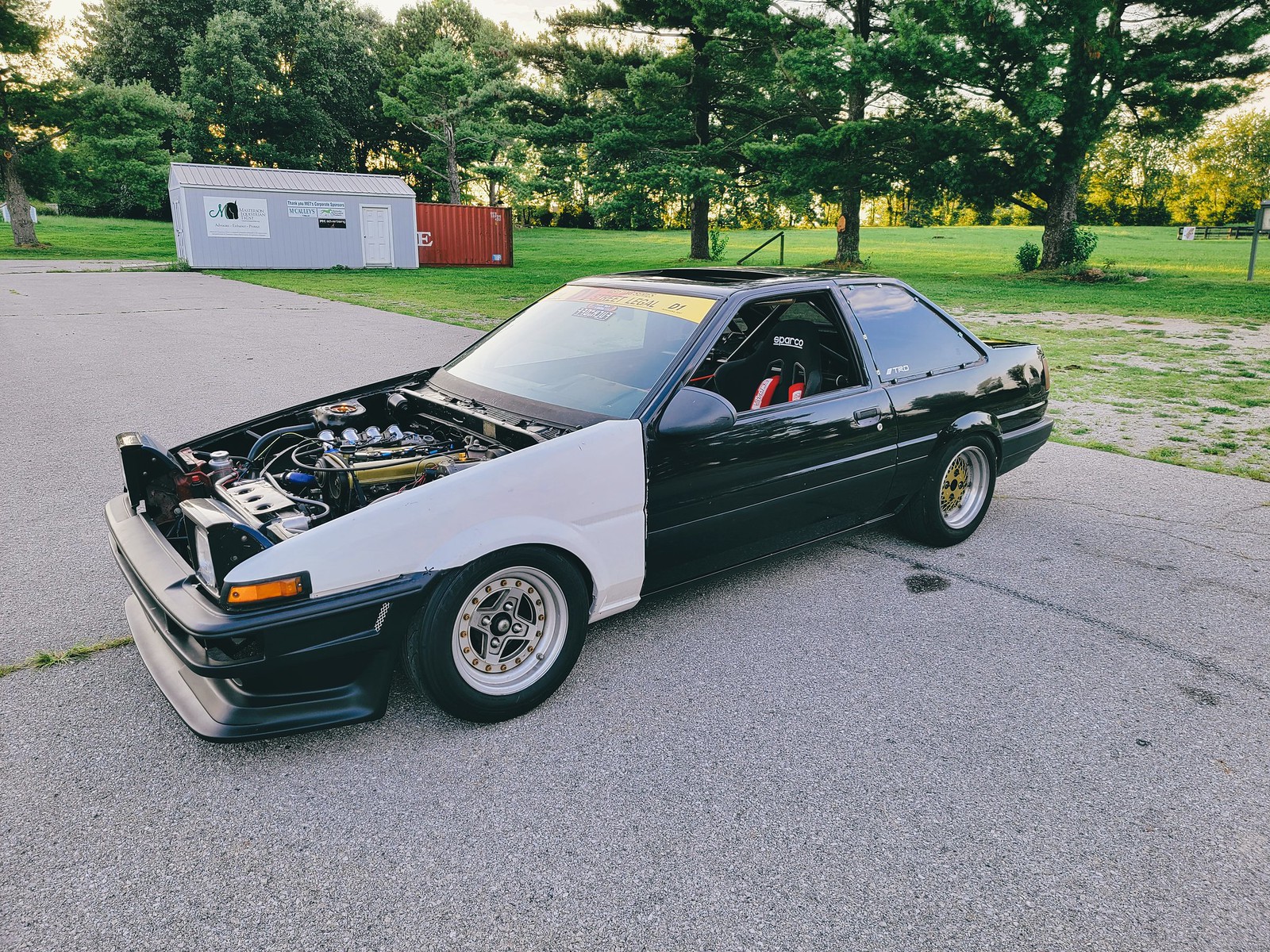 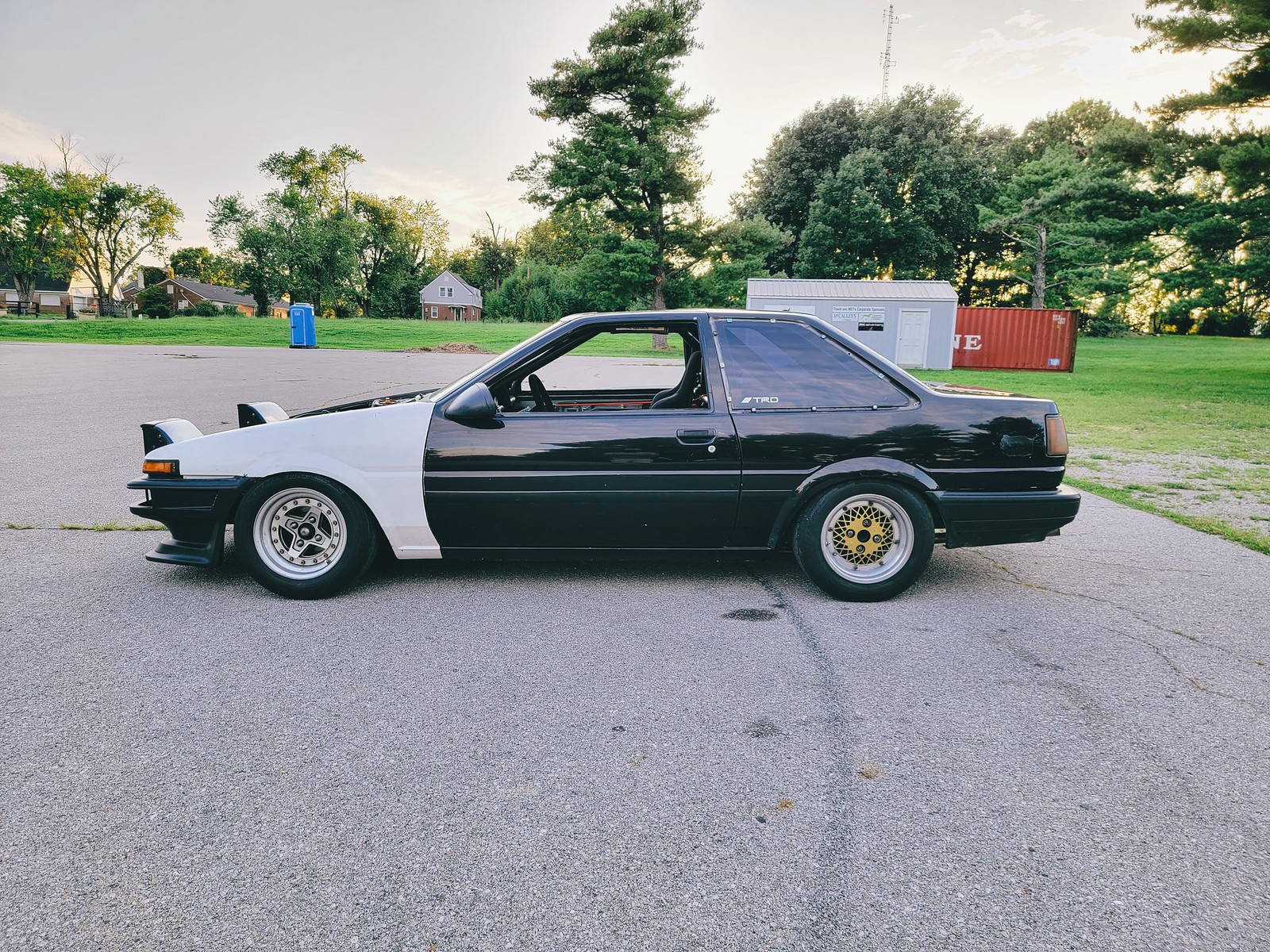 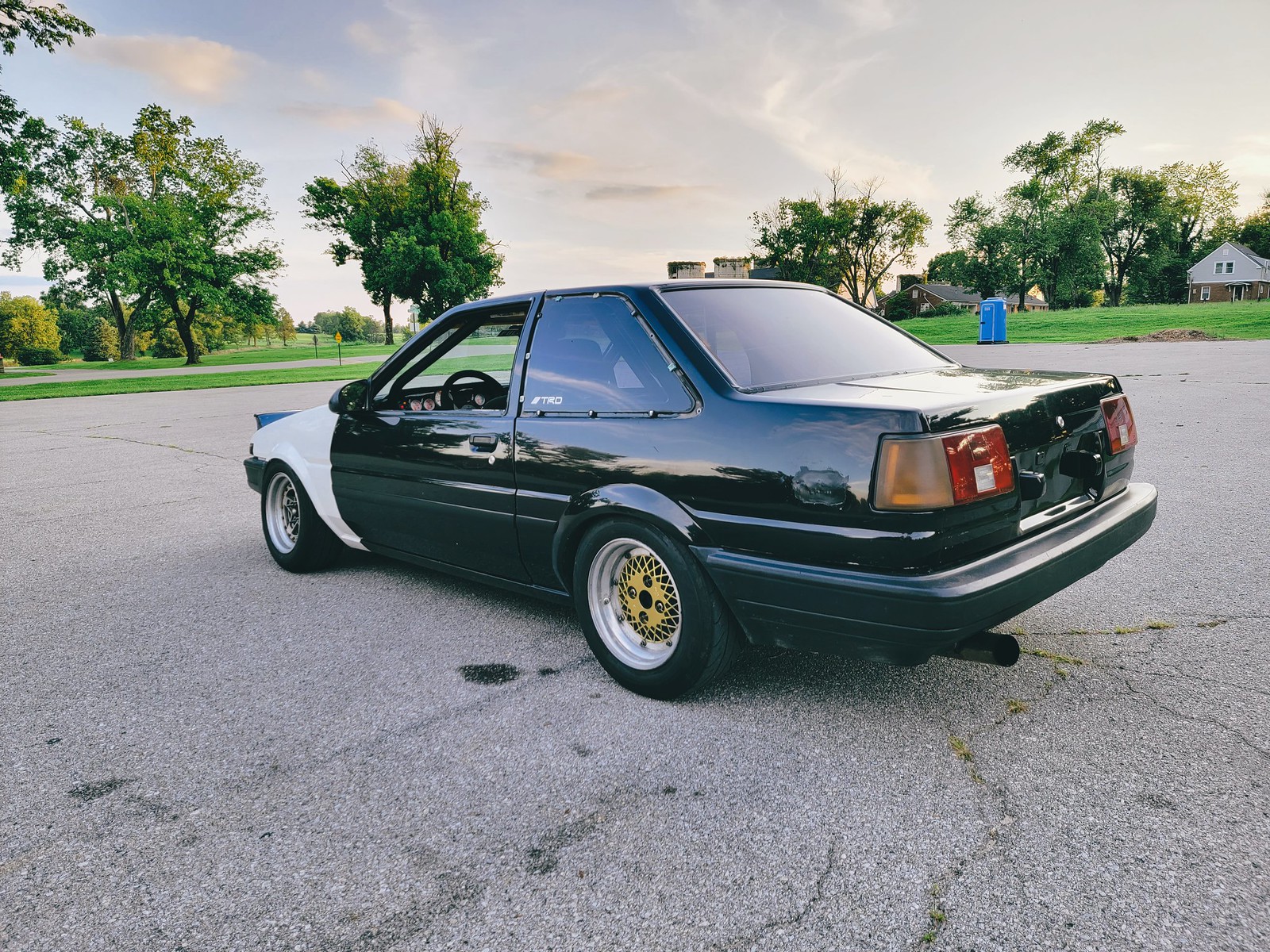 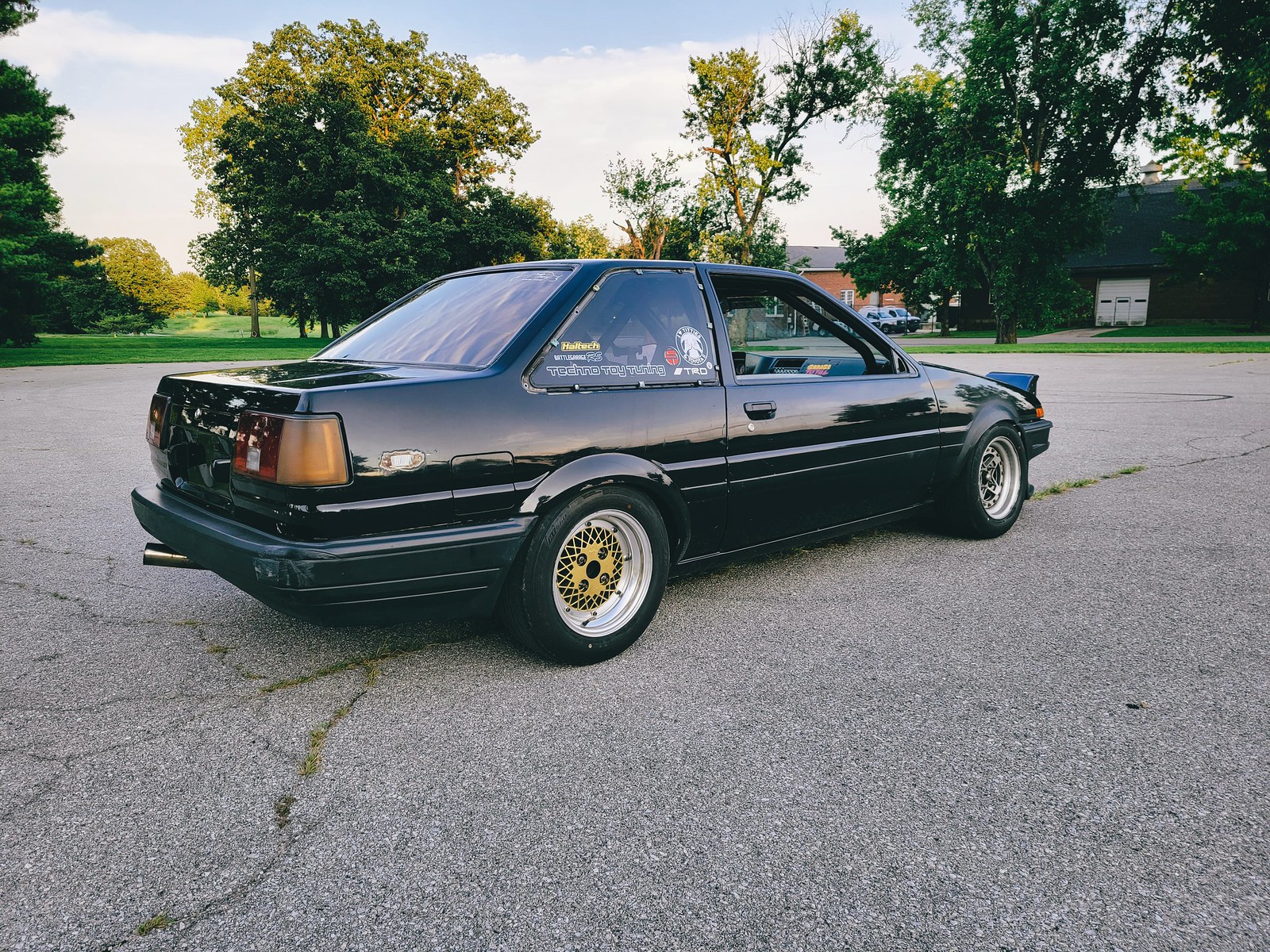 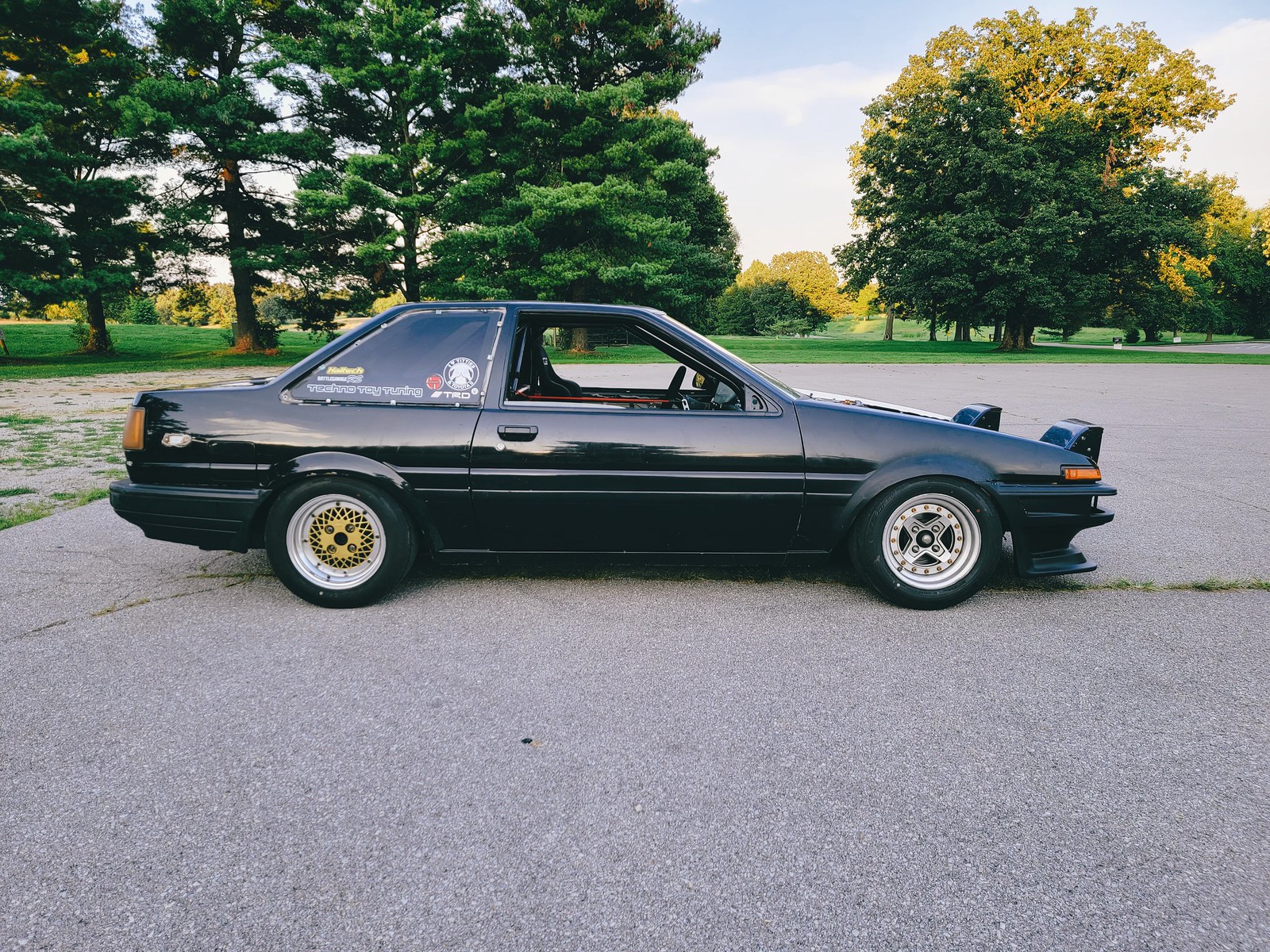 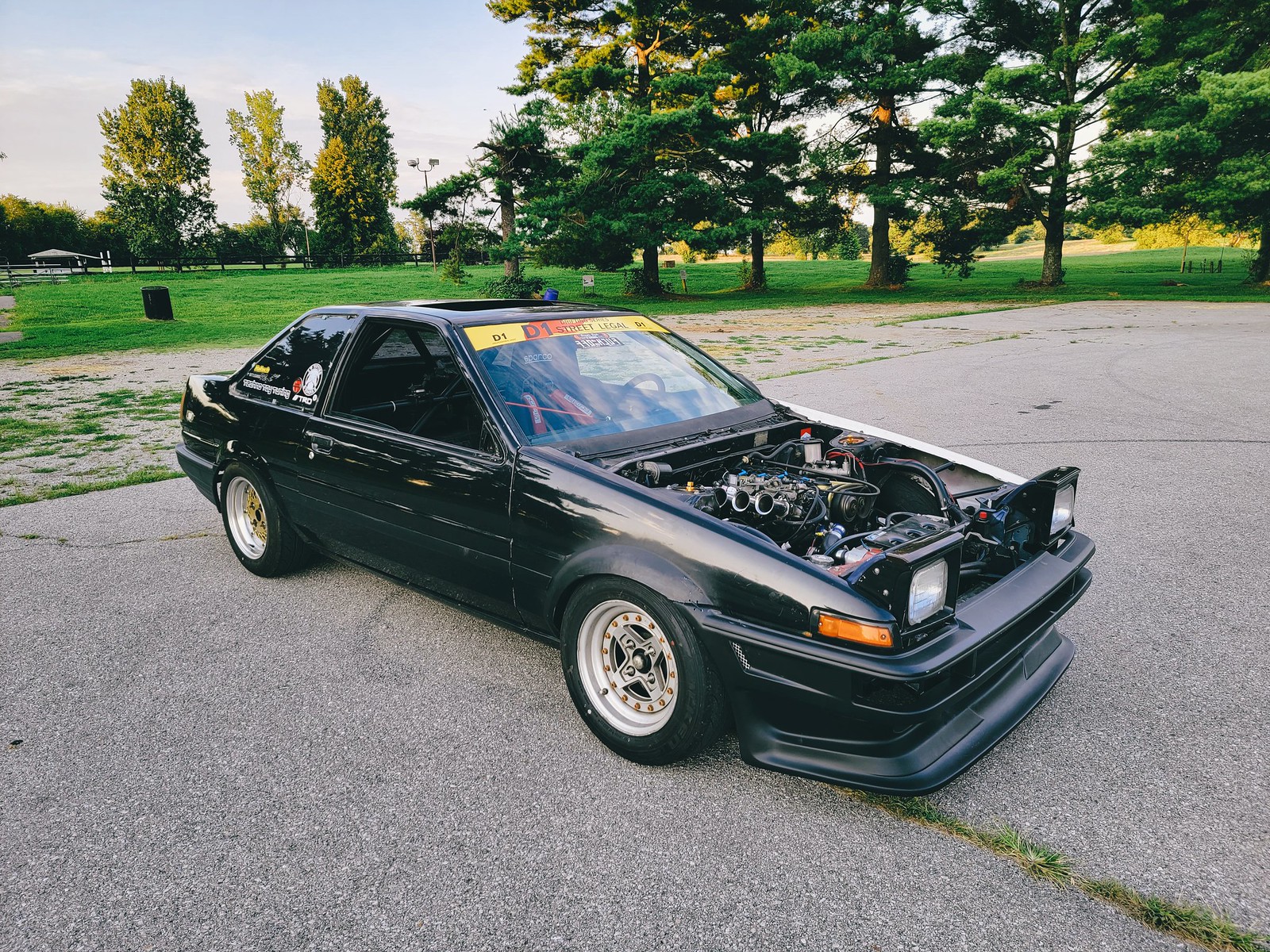 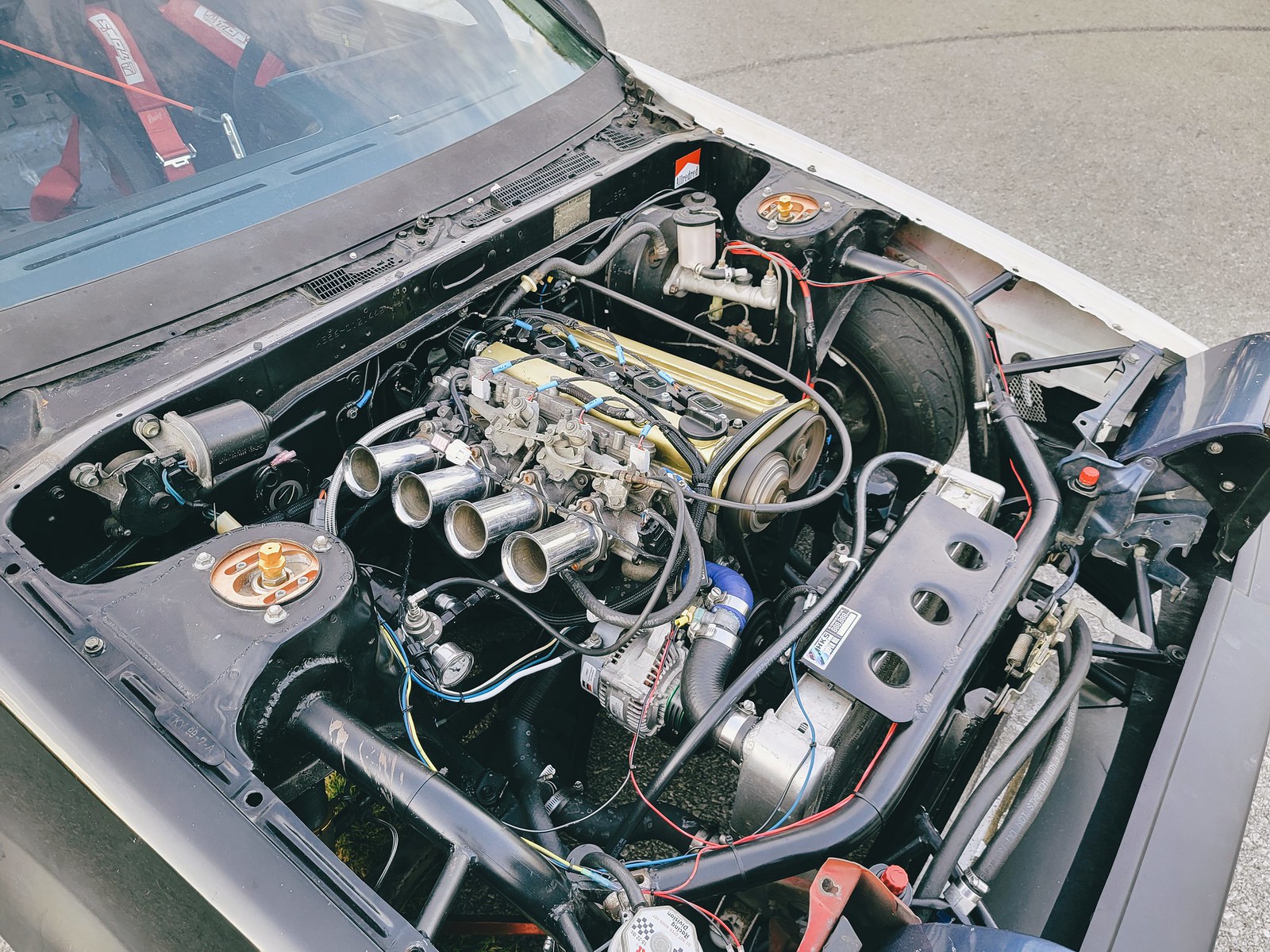 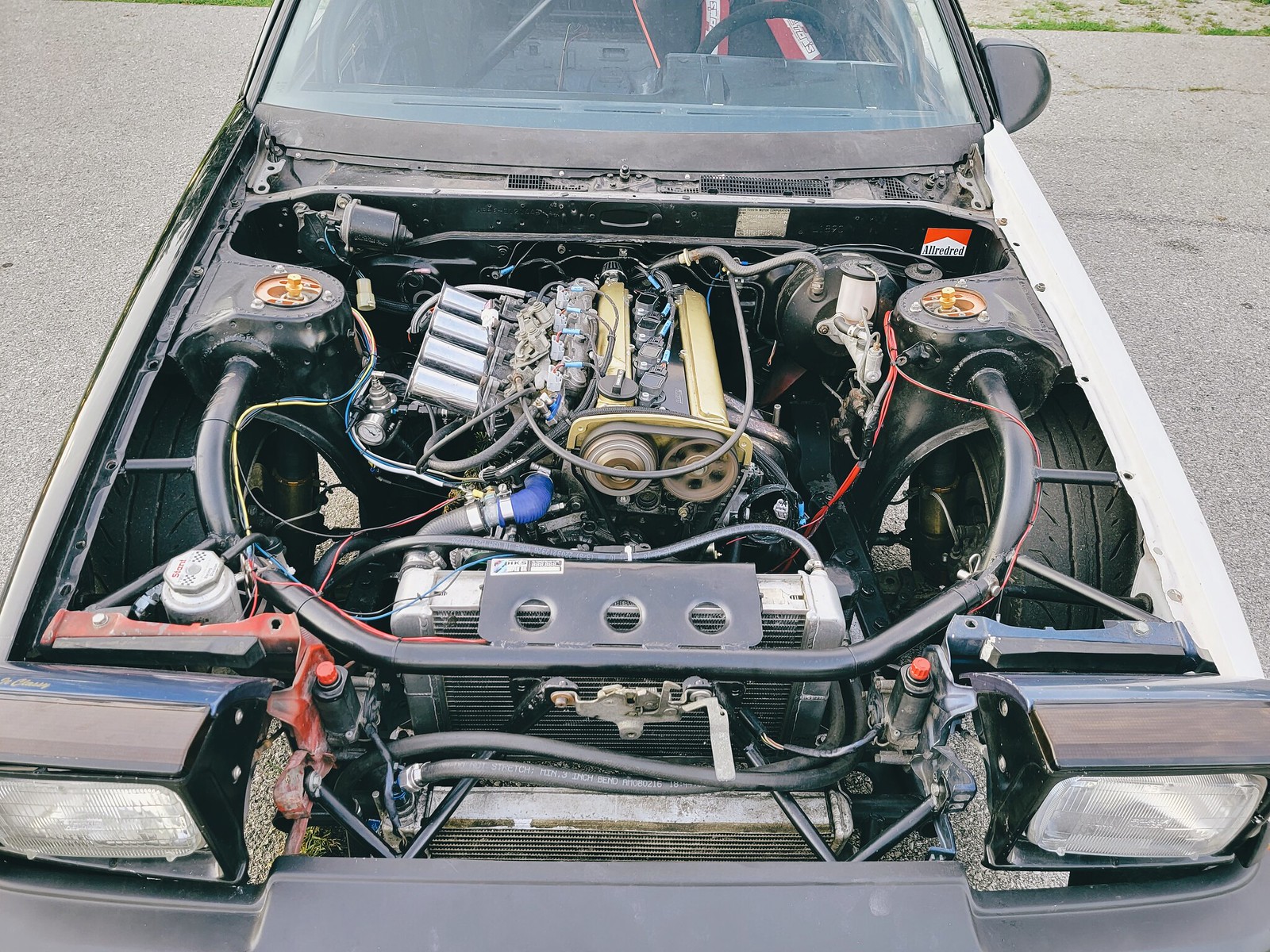 For the interior, I installed some generic AutoMeter gauges and wired everything up to a switch panel and relay bank. Like the title of the thread, the goal was simplicity. I bought a Painless 6 bank relay kit (ended up only using 4) so everything has its own circuit. Ignition switch provides 12v power to the little fuse panel, which provides power to the ecu, gauges, and the switches for the other relays. The only things I wired up is the fuel pump, fan, and lights. All of which get their own switch and relay. 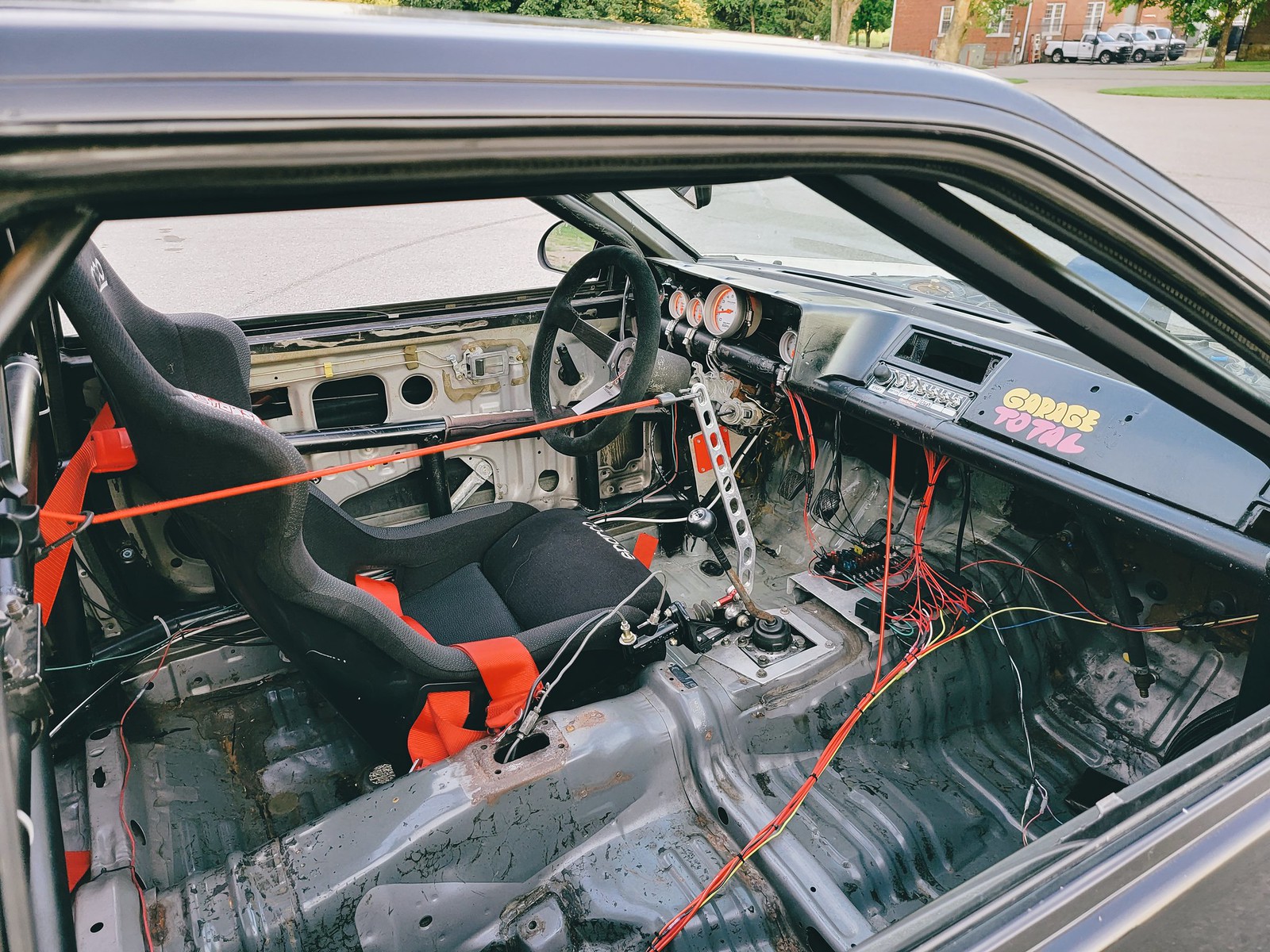 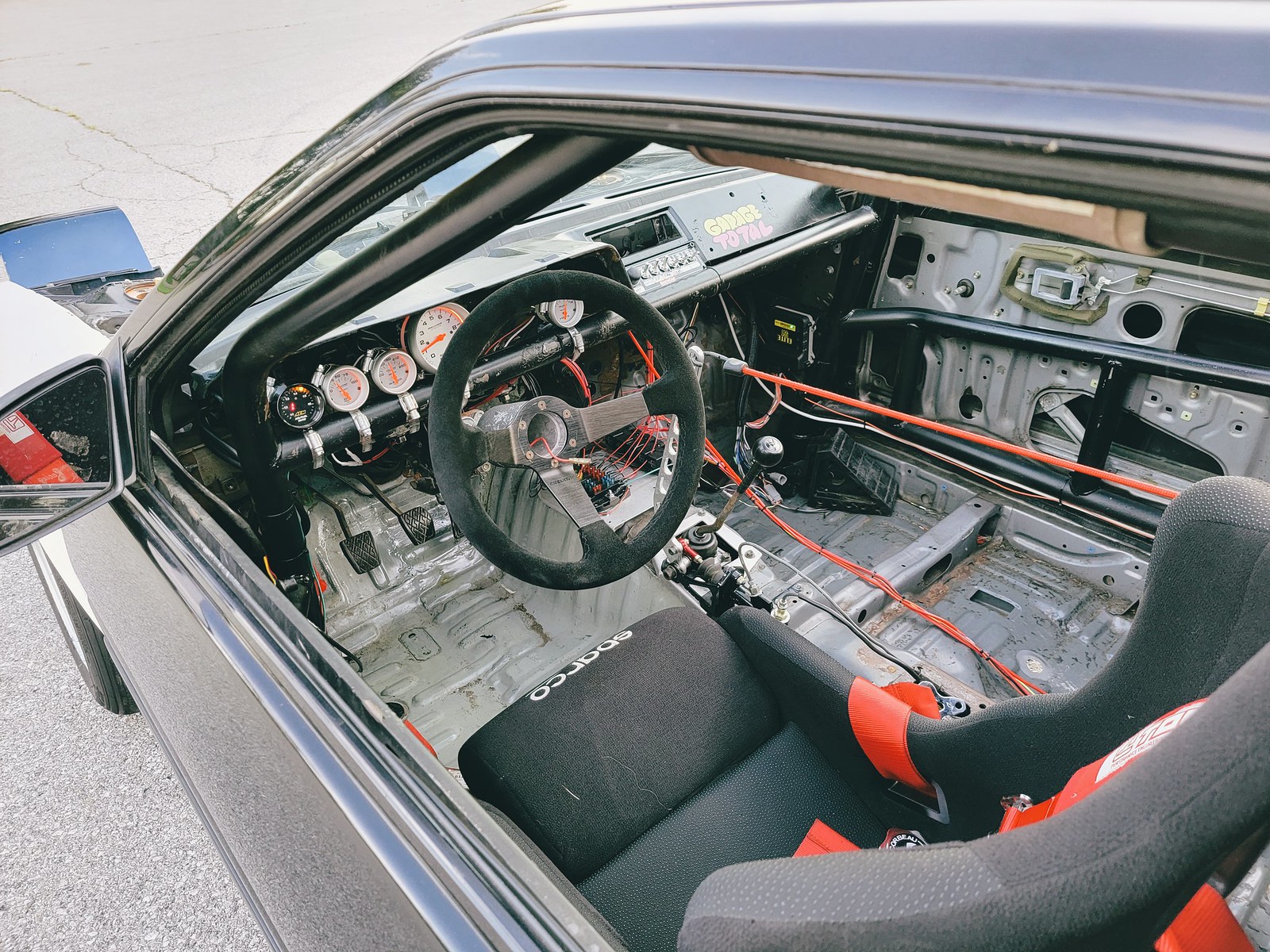 Whooa!! That is really nice. The roll cage and front frame is outstanding. Do you know what the wt is down to?
Keep us up-dated.
Top

davew7 wrote:Whooa!! That is really nice. The roll cage and front frame is outstanding. Do you know what the wt is down to?
Keep us up-dated.

The weight of the vehicle.
Top

davew7 wrote:The weight of the vehicle.

I get motion sick

Building a great engine takes knowing the end... before you begin

Enjoy Life... its the only one you get!
Top

After the tune I began driving it around town, slowly breaking the car in. I noticed the AFR values would sweep full rich to full lean, back and forth constantly, so much that you could literally feel the car bucking. This was only at partial throttle too. At idle or wide open throttle, the values would read pretty consistent.

After speaking to my tuner he recommended I ditch the AEM gauge and upgrade to a Haltech WB1. Got her wired up and working this weekend:

(pardon the mess, it looks worse than it actually is) 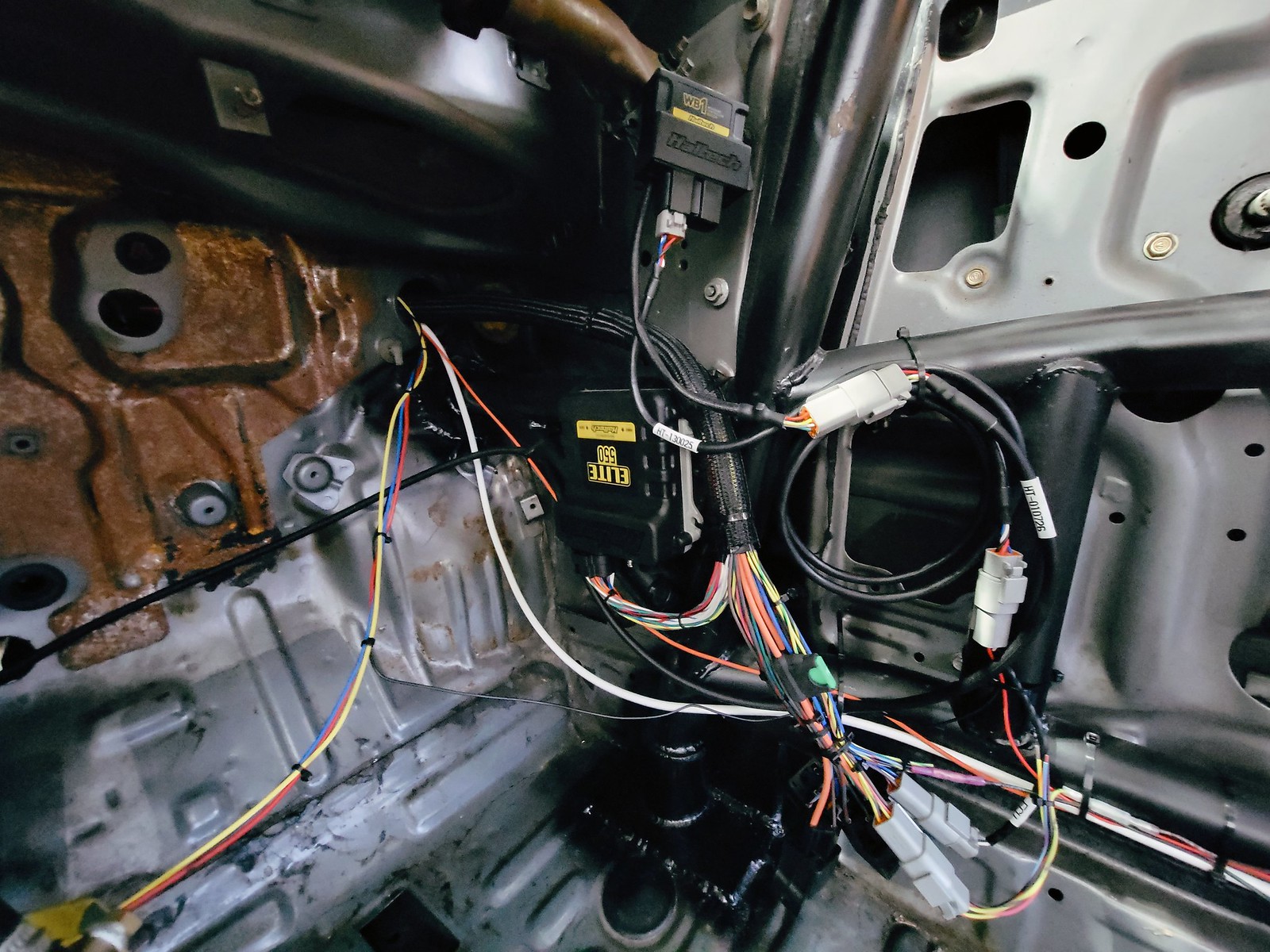 I also pretty much rewired the car last week over something totally stupid. The car began shorting out and shutting off anytime I actuated the clutch and/or throttle. I checked everything and couldn't find anything wrong. Turns out my starter was backing itself out, and anytime the engine/transmission shifted, the terminals on the starter would short out against the block.

I took that opportunity to make some slight changes to the wiring:
- Cleaned up some grounds
- Wired the ECU to its own switch/relay, put a 10amp fuse inline with it as well.
- Wired the switches for the fuel pump, fan, lights, and ECU in parallel, but put them in series with the main ignition switch.
I initially had everything tied to the fuse panel, which was controlled to by my main "ignition switch/relay". 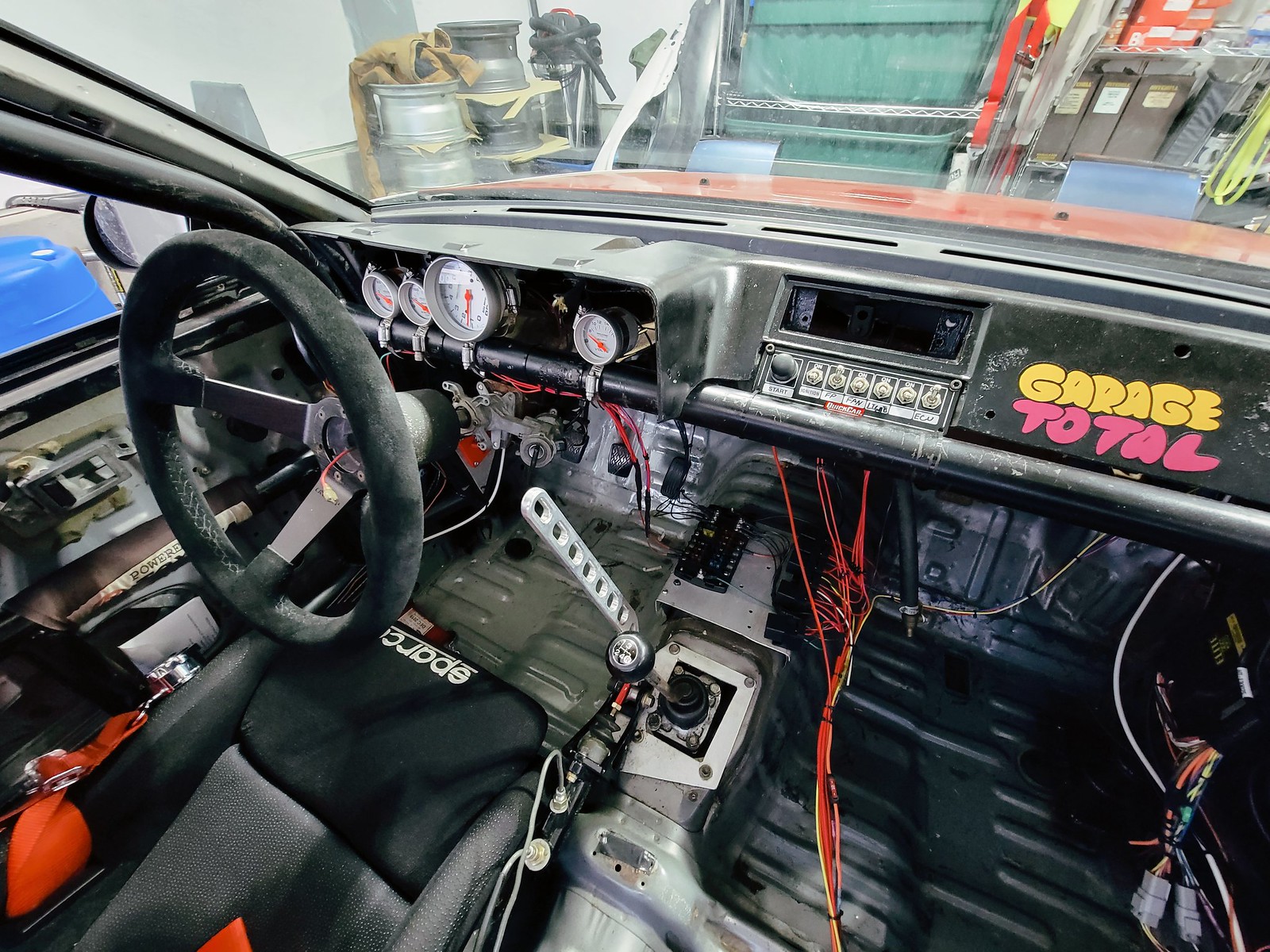 Also got the alignment done and swapped the exhaust today. They found a TON of loose stuff. Control arms, caster arms, basically all bellhousing bolts were loose, etc. It was a miracle this thing didn't fall apart on my way there! They also found this, which was most likely caused by the loose bellhousing:

This is the passenger side of the engine block, where it mates to the transmission near the slave cylinder. 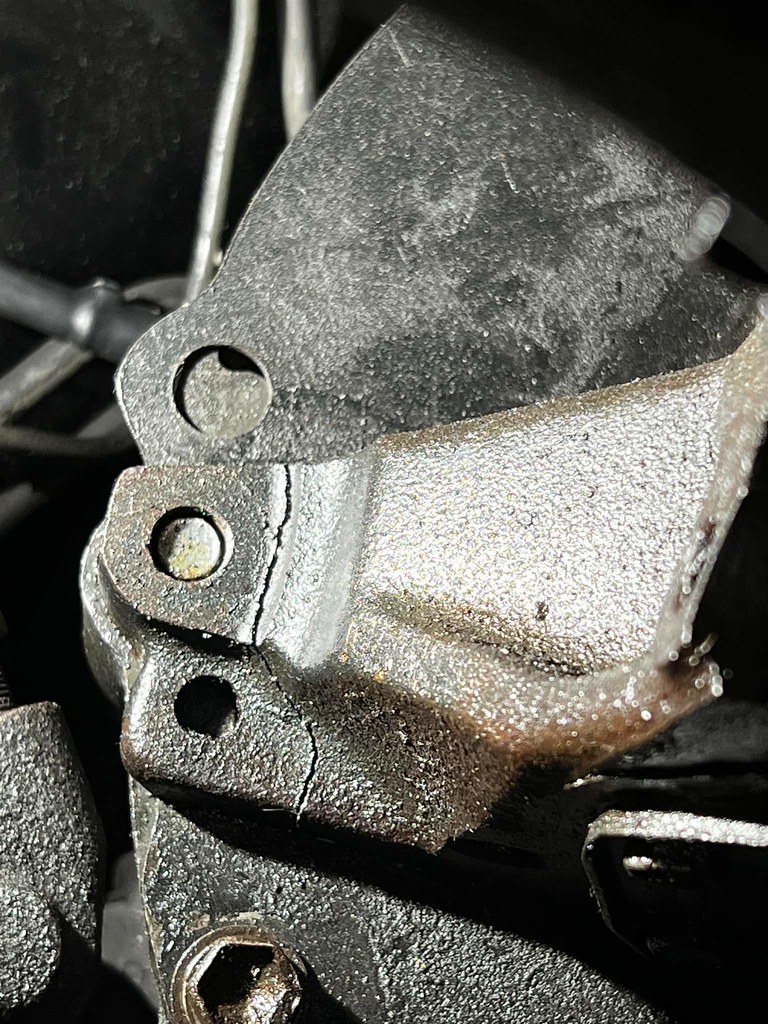 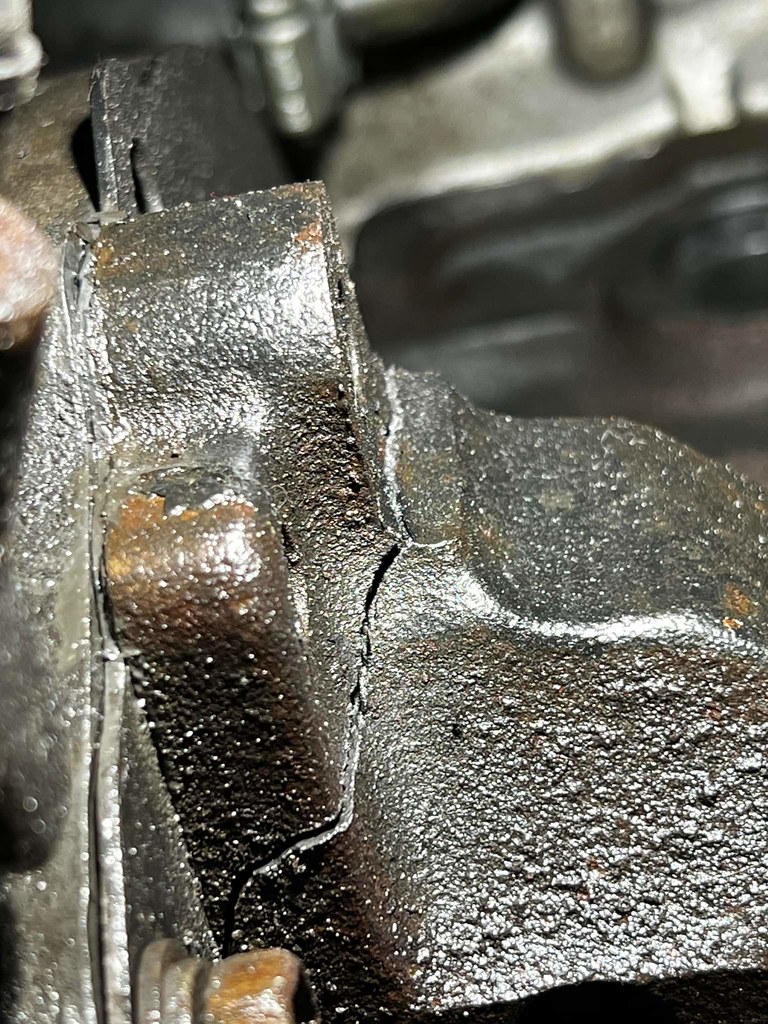 You will have to pull the engine so you can "V" notch both sides of the crack. Find a weld shop that does cast iron and has Nickelcast rod. Welding cast iron requires a very clean surface and pre-heating before welding. Do you have or are you using the engine to trans brackets that tie the engine block to the lower area of the bellhousing. If not, I would fabricate a bracket(s). If you use tubing for the brackets, you can save several pounds.
Top

davew7 wrote:You will have to pull the engine so you can "V" notch both sides of the crack. Find a weld shop that does cast iron and has Nickelcast rod. Welding cast iron requires a very clean surface and pre-heating before welding. Do you have or are you using the engine to trans brackets that tie the engine block to the lower area of the bellhousing. If not, I would fabricate a bracket(s). If you use tubing for the brackets, you can save several pounds.

I'll have to look into that! Sounds like a good temporary solution until I go about either swapping blocks or paying someone to weld it back in place.
[I have no idea what I'm doing]
_____________________
instagram: @dacobjurbin
Top